HOW IT WORKSNote: Mobile message and data rates from your cell phone carrier may apply.

Closest feeling to having all of your teeth.

Treatment performed in just one day.

“all-inclusive” that includes extractions (if needed), all post op visits, teeth for healing and permanent teeth with titanium bar.

Dr. Martin is known for his expertise in All-On-4 Implants. He discovered early in his career the profound impact a new smile has on a person's life. The immediate happiness and confidence in his patients lead them to succeed in all other parts of their life. Dr. Martin is committed to help transform lives one smile at a time. He exerted himself in extensive training around the world to become highly skilled in All-On-4 Implants. Dr. Martin, certified in IV Sedation, creates a comfortable and pain-free experience for his patients during this procedure. 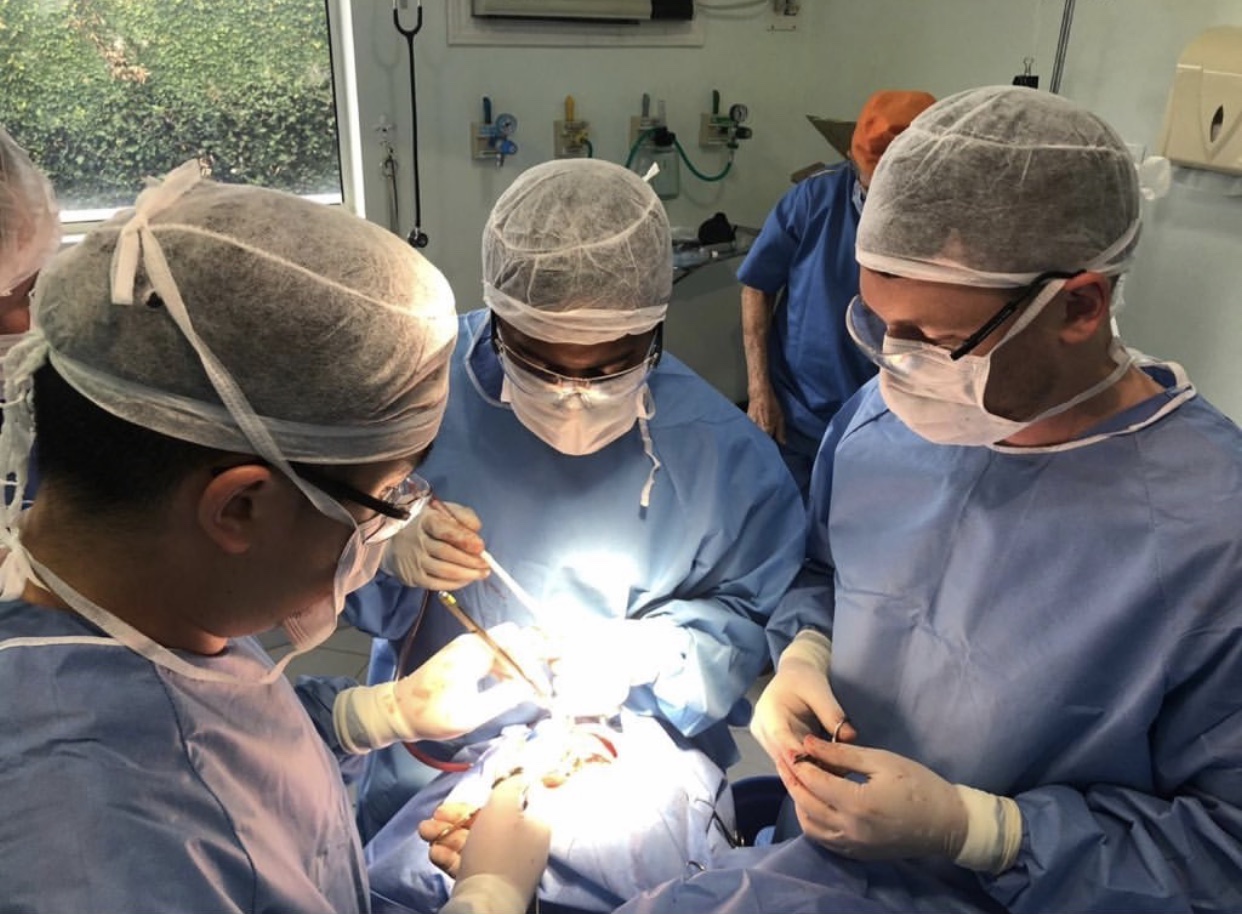 "The All-On-4 is safe, comfortable, permanent, and changes people's lives. People instantly feel happier and more confident. For many, the transformation is a new beginning for them. They smile more, they work harder, and they learn to love themselves more. It's my favorite thing to see. I feel grateful to be a part of such a life-changing experience." - Dr. Martin 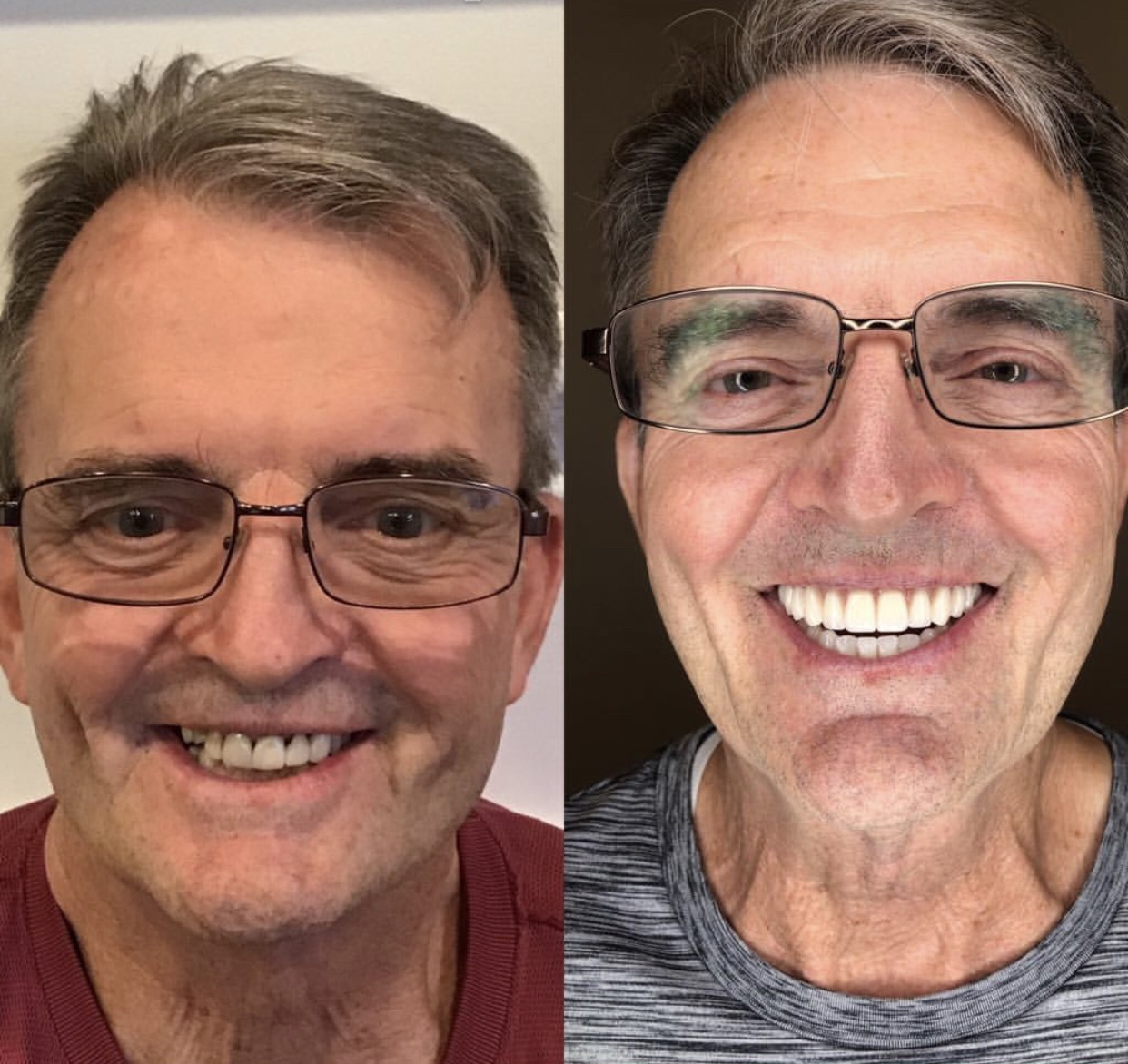 "These are better than awesome, they are sensational. Very little pain. I can eat whatever I want. I'm telling you, if you have a problem with your teeth, Martin Dental is the only way to go. They are so good at what they do." - Ron

WHAT IS AN ALL ON FOUR IMPLANT?

The term All-on-4 refers to "all" teeth being supported "on four" dental implants, a surgical and technique prosthodontics procedure for total rehabilitation of the edentulous patient or for patients with badly broken down teeth, decayed teeth or compromised teeth due to gum disease. It consists of the rehabilitation of either edentulous or dentate maxilla and/or mandible with fixed prosthesis by placing four implants in the anterior maxilla, where bone density is higher. The four implants support a fixed prosthesis with 10 to 14 teeth and it is placed immediately, typically within 24 hours of surgery. 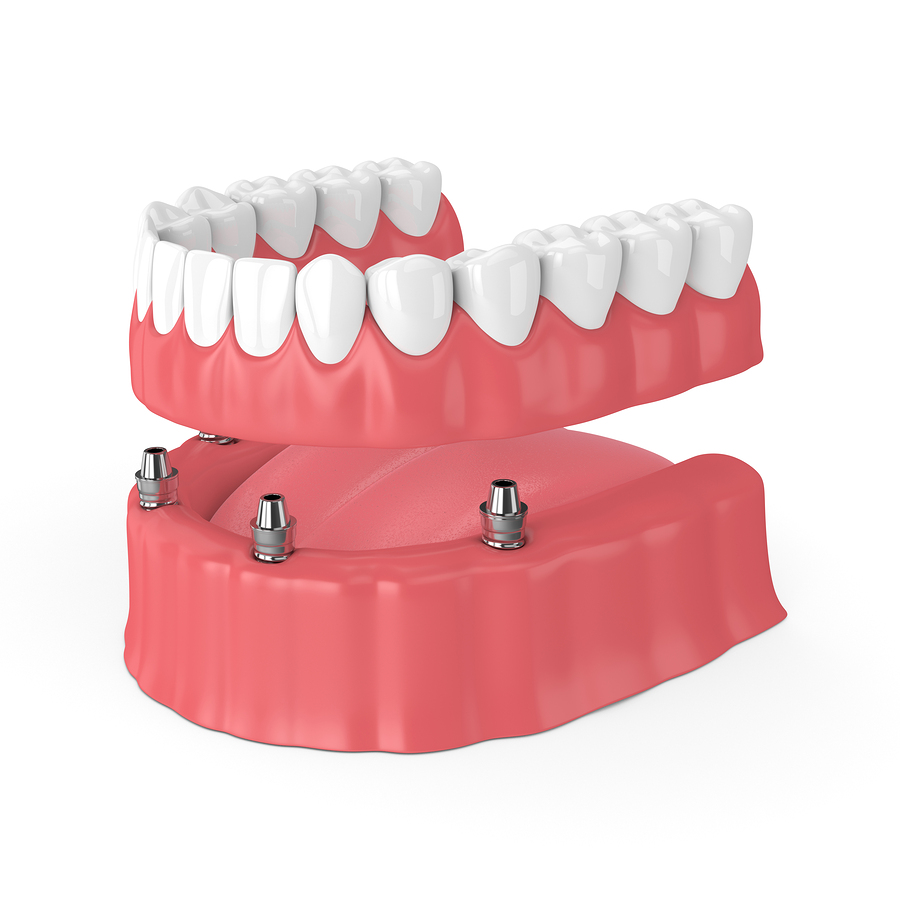 Implant manufacturer Nobel Biocare was among the first to identify the evolution of the All-on-4 technique as a potential valid and cost-effective alternative to conventional implant techniques, and funded studies by Portuguese dentist Paulo Maló[3][4] to determine the efficacy of this approach. During this time this technique was also used by various other clinicians around the world.

All-on-4 is not an invention, but rather a treatment technique that has evolved over time and has the following features:

The concept itself of the total rehabilitation of a full set of teeth supported by as few as four fixtures was not a new one. Professor P-I Branemark, who discovered osseointegration, published numerous articles in the 1970s with successful rehabilitation of a full arch supported by this number of fixtures. However, it was the angulation of the back implants that led to today's All-on-4, and has been trialed by numerous clinicians simultaneously in the United States, Sweden, Portugal, and South America in the 1990s.

The technique evolved when in an attempt to avoid certain anatomical limitations typically seen in the back of the upper and lower jaws have, clinicians successfully avoided bone-deficient areas with the use of angulated implants. Anatomical limitations are more prevalent in patients with full dentures, and once the back implants are placed at an angle there is often only enough room left for two more implants in the front. This has led to the use of only four fixtures to support a full set of teeth.

The benefits of All-on-4 implants include:

Please contact Martin Dental today to schedule your consultation and learn more about how you can design a beautiful smile in a single appointment! 480-542-4433